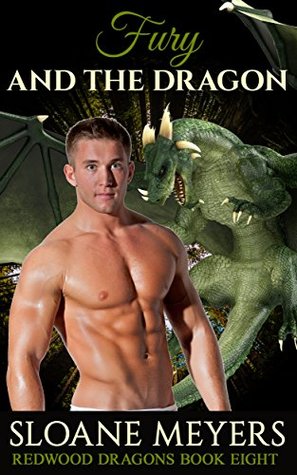 Violet and Wes have developed a friendship lately.  While Violet isn’t a career military person, she certainly stepped up and did what was necessary in this fight for good against Saul and his evil army.  Wes knows battle, and when he and Violet are assigned a mission together he’s definitely interested in spending more time with her.  He wouldn’t mind being with her in a more personal way, but Violet doesn’t see war and romance mixing.  Maybe he can change her mind.

I adored both of these characters.  And, yes, Wes deserved every single verbal slap that Violet dealt him with his “I know war and you don’t” attitude.  She just went ahead and proved him wrong, like any mate would do.  *grin*  With charm, wit, sexy tensions and a growing love between these fated mates Wes and Violet will face dangers they didn’t expect.  And make choices they couldn’t have foreseen.

I enjoyed Fury and The Dragon very much.  This series is so spellbinding in capturing the imagination.  We’re getting closer to the end now – it’s going to be difficult to let my dragon shifter and wizard friends go.  I would highly recommend this story and the entire series to any Paranormal Romance or Shifter Romance reader who enjoys a solid story, tense situations, mystery, danger and definitely that sexy fire that mates spark off of each other.