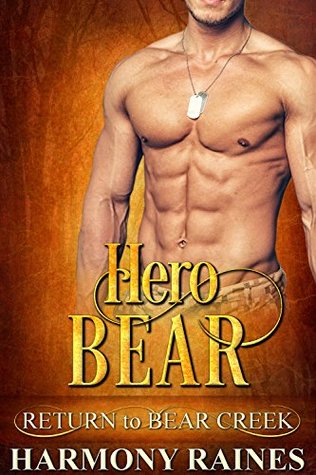 Sometimes fiction mirrors real life, and while we’re being entertained we’re also reminded of the sacrifices those who defend our country go through.  That is my main thought about Hero Bear.  While I was certainly entertained, I was also vividly reminded of those brave men and women who fight to insure the freedoms that I take for granted.  That it’s not only physical and emotional injuries that are faced but how the survivor’s guilt can tear down the strongest person.

Knox was headed to his friend’s home in Bear Creek.  Jamie was ex-military like him, they’d fought together but Jamie had gotten out before the ambush that changed everything for Knox.  He really had nowhere else to go to so the offer of shelter, work on a renovation at Jamie’s home was something to do while he figured out the rest of his life.  He hadn’t expected to meet her in Bear Creek.  For the one woman meant just for him and him for her to be standing right next to the obnoxiously flirting woman in that store… but there she was.  And now what did he do.  He wasn’t worthy of his mate, he’d bring bad into her life as well.  But fate had other ideas.

Hannah was facing changes in her life and she made the choice to stay in Bear Creek for there were people here that really needed her.  So with a new house to rent, a new life to figure out she’d gone looking for food and found… him.  Sexy as sin, yet somehow wounded.  She couldn’t have explained it to her best friend but she knew that this stranger was important to her so she’d see where this took them both.

Hero Bear tackles survivor’s guilt on two different levels and instances.  Knox’s from the ambush and Hannah’s young friend (client) Dustin who is facing the birthday of his deceased father with difficulties.  Dustin is having trouble with his shifts, he’s being bullied at school and he misses his father to the point of endangering himself.  Watching Knox bring Dustin back from the edge, for these two men to help each other heal was a touching experience.  Oh, Hannah and Knox were pretty perfect together, don’t ignore that part – but it was Knox and Dustin who stole this story for me.  Both survivors, both wondering why and how to move on with that burden on their shoulders.  Hero Bear gave me more than an entertaining read, it gave me something to think about beyond the final page.

I’d recommend this story or any in the Return to Bear Creek series to readers of Paranormal Romance or Shifter Romance.  You’ll find realistic characters facing everyday challenges and a steamy love story as well.