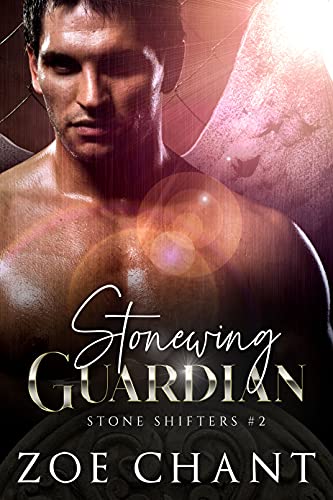 After a devastating accident, archaeologist Thea shut herself away from the world. But now, there’s an incredibly hot guy in her office, with an offer that might just be enough to drag her back into the field. He’s either crazy… or an entire secret race of magical shapeshifters desperately needs her help.

Time is running out for gargoyle shifter Mace. His people are in grave danger, and their only hope is a lost Viking amulet… and the brave, smart, emotionally scarred woman who might just be his mate.

But if this is going to work, he’ll have to trust a human with his people’s greatest secret…

… and she’ll have to trust him with her heart.

Please visit the Zoe Chant page for a look at so many titles and great series.

Stonewing Guardian is the second title in the Stone Shifters series, which is a spin-off of the Bodyguard Shifters.  Mace and Thea’s story is a nerve-wracking, intense tale from start to end and I loved every moment back in this world once again.

Mace is certain he knows how to find the amulet his people have desperately been searching for, but he’s going to need some major help from one scholarly expert and she is dealing with some major issues of her own right now.  Thea loves the discovery of the past, but during a recent excavation, she was involved in a cave-in which has led to an intense fear of enclosed places… which makes going on digs very difficult.  She’s hidden it so far, but when Mace comes to her with such an enticing project she’s tempted… oh, so tempted.

Stonewing Guardian is action-packed, with the added bonus of some unexpected twists in the overall storyline.  And I love when that happens.  Because some of those twists involve characters from the first story in the series, Stoneskin Dragon, I’m going to suggest strongly that the Stone Shifters series be read in order for all of those background bits of information to make sense in the current story being read.

I hesitate to get into any more details for that would be entering the spoiler zone in my opinion.  I can state that the developing romance between Mace and Thea is endearing and sizzling, the return of some favorite characters with those added twists makes me want the next story right now, and the introduction of intriguing characters has me hoping for more stories where they take the spotlight.  Vague, yes, but you should discover the book clutching, tense knuckles, don’t interrupt me reading for yourself first hand.  I haven’t seen when the next title is releasing but I’m really hoping for soon for there are things I need answers to… and you will as well.  If you love a good Shifter Romance full of questions, quests, mysteries, and mates then this story and series should be on your need-to-read list.