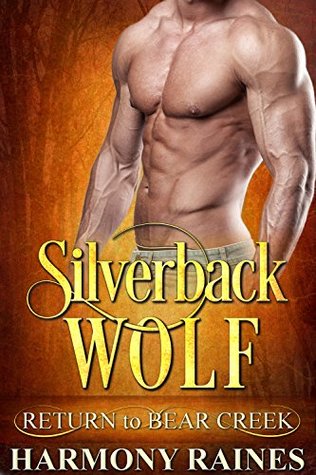 Wyatt has hidden himself on the mountain above Bear Creek, his reasons are his own and they matter to him.  He isn’t the least concerned what others think about him, he needs the open spaces and alone-ness of this mountain.  Over the last several stories we’ve gotten a better look at Wyatt and gotten to know the surface of this lone wolf.  Finally Wyatt gets to find his mate and perhaps put some closure on the events that lead to his being on that mountain alone.

Silverback Wolf will bring many of our favorite shifters into this story as well as bringing Monica, Wyatt’s mate to Bear Creek.  She’s protecting a friend’s young son from what or who she doesn’t know but she has suspicions.  With help from Wyatt, a man her friend trusts, and perhaps letting others in from Bear Creek they can solve a dangerous situation and bring a family back together again.  I’m always glad to see older couples pair up in any series.  Love doesn’t stop at some magical age.  Wyatt and Monica have been through much in their lives, and eventually those things lead to each other.  There is betrayal in this story, yet there is also hope that eventually life will right itself and the good guys will come out on top.  Loved Fiona’s fierceness in this story, she’s one dragon I’d never want to be on the bad side of.  Wyatt and Monica make an interesting couple, they fit and are quite believable together.  This story gives a better sense of the tight knit community that is Bear Creek and we’ll run into several old friends along the way.  I had a great time with Wyatt and Monica’s story and would not hesitate to recommend it or this entire series to any Paranormal Romance or Shifter Romance reader.  When each new book feels like returning home – then you know that you’ve found the right series for you.