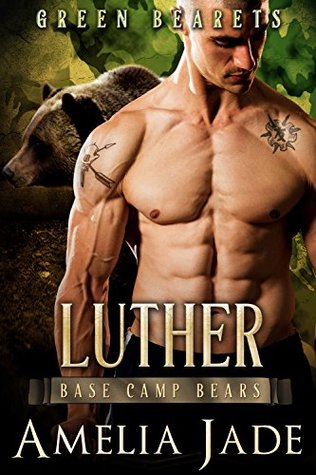 Bear shifter Luther Klein had trained his entire life to become a Green Bearet, one of the elite bear shifters of his homeland. But budget cuts by politicians forced him out just as he achieved his goal. Now, jaded at his homeland’s actions, he heads out into the human world. The nearby town of Cloud Lake calls his name, where he ends up in a dingy basement bar. But everything changes when his waitress walks up to the table and sends his bear into a frenzy…

Allix Rose is a nomad. A wanderer. She’s lived in over ten cities in the same number of years, never setting down roots. Life in Cloud Lake is okay, and she knows she’ll be content there for a while. Until the tall, handsome shifter with piercing green eyes sits down at her table. Then, everything changes.

When a fight erupts between shifters in her bar, Allix finds herself thrown headfirst into the shifter world against her desires. Can she come to grips with her feelings for Luther and perhaps discover what it is she’s been searching for? Or will the war she’s become involved with stop their blossoming romance in its tracks

The saga of the land of Cadia continues in the Base Camp Bears series  Green Bearets: Luther is a gripping story, action packed, fast paced, full of intrigue and with an overlying sense of urgency that is a feeling that cannot be ignored.  I was hooked and fully engaged from the first chapter.

However, there is also a feeling of a history, a past that I felt early on – enough that I went and did a little research and discovered that this series connects to two other series by Amelia Jade.  Now I faced a dilemma.  I’m a reader who absolutely loves the history, the feeling of continuing the overall story when there are connecting  series or story lines.  So I had to make a reading choice to either continue reading Luther or set it aside for now and go back to read the other six stories.  I found that I could not leave Luther and Allix hanging, with their story unread.  I simply couldn’t.  And that, to me, is a sign that I’m fully engaged with the characters.  So I have some catching up to do over the next few weeks, but that’s okay, it’s not an unpleasant reading chore at all.

A full out shifter war is breaking out, and Luther, his friend Aksel and Allix are right in the wrong place at the wrong moment.  The awareness tension between Luther and Allix are almost immediate – he’s just encountered his mate, but is rather clueless to the signs his bear is giving him.  It’s kind of endearing, amusing and frustrating to watch Luther’s awkward attempts to make nice with disastrous results.  The action kicks into high gear when shifters from Fenris show up at the bar, looking for trouble and taking no prisoners.  Allix ends up right in the middle of this fight, and her involvement will not end when Luther and Aksel leave to try to get back and report what’s happening in Cloud Lake.

I was captivated by Luther and Allix’s romance.  Equal parts of frustration, devotion, mistakes, expectations and certainly hot steamy moments.  Allix was a strong character to begin with, and she completely proved her worth and abilities to face anything thrown at her by the story’s ending.  I know I encountered one secondary character, Asher, who had his own story told in one of the connecting series.  I know because I went and looked him up. *grin* There may have been others but the connection was there which only made me more determined to go back to this world’s beginning.

I want to say you “could” read this series without the earlier ones – this portion of the Cadia world is complete enough for that to be do-able.  But knowing there is more background, why would you stop here.  I always recommend starting at the beginning, and I do so again with this series.

Aksel’s story is up next in this series – but while I wait I have a date with a Frost Dragon.. so, please excuse me now.