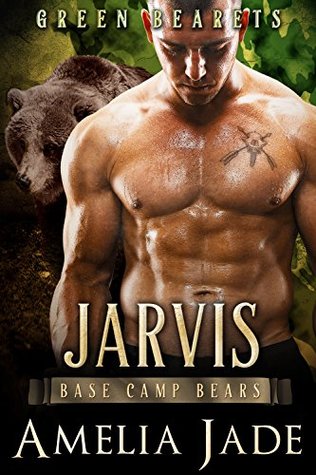 Jarvis Eidelhorn is a bear shifter, Green Bearet, and leader. He’s fought in countless battles, and is proud to be defending his homeland from those who wish to conquer it. So when a beautiful human walks into his office and asks for his help finding someone, he’s way out of his depth. His skills never trained him for this. But saying no to her deep blue eyes was never an option.

She hated him. She’d kicked him out. But when he’s abducted from her home, Carrie Suter knows she needs to do the right thing and ask for help finding him. When the gorgeous shifter Major Jarvis Eidelhorn answers her call, she can’t help but wish they’d met under different circumstances. Because he’s holding something back, and she can’t figure out why…

As the mystery behind the disappearance unravels, Jarvis is forced to admit that something sinister is going on. Evil forces are moving, and the Green Bearets must stand ready to put themselves between the humans and harm’s way. Can he save the town and ensure that the woman he knows is his mate doesn’t get away?

Carrie has good reason to be afraid of shifters considering what happened in her home a few nights ago.  She’s trying to make herself go and report the crime, but she keeps backing off at the last moment.  Eventually she’s almost forced into going in to the headquarters and speaking to the man in charge, Jarvis.  While there is a spark of electricity when they touch, Carrie is too nervous to take particular note of it.  Jarvis on the other hand knows exactly what that spark means, his bear is telling him loud and clear.  And it’s just as obvious that Carrie is here to report a missing boyfriend… so that mate ship has sailed for Jarvis.

There is something odd about Angelo’s disappearance.  Jarvis can’t put his finger on what that is… until almost too late.  As Carrie and Jarvis spend time together investigating clues  the attraction between them is obvious, but to Carrie’s frustration he’s not acting on any of her signals.  It will take a very angry Carrie to finally straighten out his misconceptions and assumptions.

As the pieces of the puzzle fall together, Jarvis must act quickly to divert a disaster.  And to save Carrie’s life.

Jarvis and Carrie’s story is gripping, definitely sexy and brings the conflict in Cloud Lake to a head, and war to Cadia’s borders even closer.  I enjoyed this couple’s adventures.  There is gripping, action that brings the tensions decidedly higher, and some sweet, calm moments that celebrate what all of these bears have found with their mates.  A very nice balance within this romance.

If you’ve followed the connecting series so far, then I’m sure you’ll enjoy Green Bearets: Jarvis very much.  If you haven’t read any of the series yet then I’d strongly recommend them all as very entertaining and addicting reading.