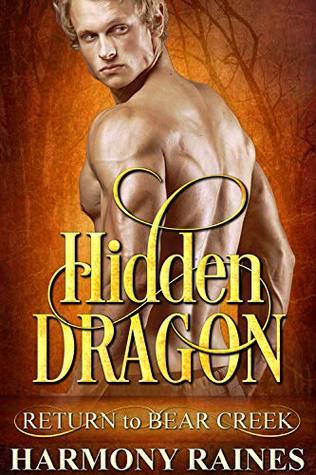 As 600-year-old dragon shifter Doran stirred in his cavern beneath the ground at his mate’s approach he had no clear idea of the world he would be tumbling into – or the dangers from his past that he still must face.  Hidden Dragon brings Fleur and Doran together as, perhaps, unlikely mates.  One bear shifter, one dragon shifter, one lost in this world, one afraid of losing herself in the world created with her mate.  This story gave me pause at several moments while it intrigued and entertained me at others.

There are mysteries swirling around Doran as to how he was put under into the feared deep sleep, and so much more.  There is also a present and current danger to him and his mate from an unexpected source.  Fleur’s family, friends, and the community of Bear Creek will come to Doran’s aid in discovering his past and solving a new challenge.

While I enjoyed Doran and his quick adaptation to modern times, for once I wasn’t able to easily see past a heroine’s stubbornness or her unnecessary sarcasm.  I understood that an ancient dragon who had been asleep for centuries was revealed as her mate and that his ideas of a woman’s part in his life and hers might be different.  But seeing what Doran was facing, he certainly didn’t deserve that attitude from his mate – and I’ll admit that it bothered me more than usual.  Aside from not being able to really connect with Fleur I enjoyed my time in this world once again, and would not hesitate to recommend this story or any other one from this series.