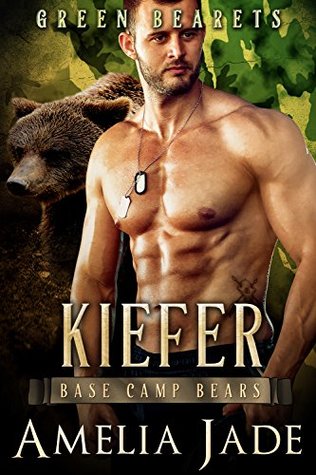 Lieutenant Kiefer Hartmann was on duty. Tasked to watch the grounds of Base Camp to prevent a surprise attack, he was simply doing his job when he saw the strange figure ready to jump from the roof. But after charging to the rescue, it appears that perhaps he’d gotten things wrong. Now the gorgeous woman he’d just tried to save thinks he was out to kill her.

Two weeks. For two whole weeks Peyton Raine has been kept penned up at Base Camp. She wasn’t overly upset about it. Not toward the Green Bearets at least. What happened to her wasn’t their fault. After being rescued from the clutches of the evil Fenris shifters, it was expected that she would go back home. There was only one little problem with that…

The more time she spends with the Kiefer, the more Peyton realizes he doesn’t know about her condition. The way he treats her is refreshing and she finds herself wanting to spend more and more time with him. But a chance encounter during an unexpected trip back into human civilization has threatened it all. Can the pair unravel the secrets of her past together, or will the truth of Peyton’s real identity rip the lovers apart?

As a couple, Kiefer and Peyton make a dynamic statement.  As individuals they are both strong, stubborn and determined to do the right thing, even when what exactly that is happens to be up for debate.  Green Bearets Kiefer gives us an interesting story that slightly changes everything we know so far and opens up possibilities for the future as well.  I found this story a little more intriguing than what came before for the simple reason of opening up unknown ground for this series.  Some basic questions are answered by the ending of this story – and even more questions come to mind at the same time.  Because of that I’m going to be a bit vague in order to not give away spoilers.

Peyton was one of the unexpected prisoners found during the Fenris prison raid.  She and the others have been housed in the base camp headquarters area awaiting their return to family and life as they knew it before.  All have since left, except Peyton.  She has no memory of her life before that prison, the reasons are not gone into deeply but for whatever reason she has basic understanding but no knowledge of who she is, where she belongs or her life before.  Her restlessness often takes her to the rooftop of her building late at night.  It’s on one of those nights that Kiefer mistakenly thinks she about to jump to her death and rescues her – is it a rescue when there was never any danger… I dunno but to him the danger seemed very real.  Their mutual attraction begins a light romance, but Kiefer is holding back because she has no idea if she does belong to someone yet unknown.  Yes, his bear and he feel that she might be their mate, but he’s trying to keep a lid on those thoughts until more is known.

Now comes the part where I need to be vague.  While in Cloud Lake, Peyton has a memory flash, and that soon leads to more questions and some surprising actions around her.  As she, and Kiefer slowly learn more the danger increases until the point where Peyton does recover her memory – and life is never going to be the same again.

Green Bearet Kiefer is certainly fast paced, full of action and sexy moments.  It’s also an intriguing look at what we’ve known from this and the previous connecting series… and adds a spin that is… very interesting.  I am definitely looking forward to seeing where this takes the rest of this series and perhaps ties into another connecting one (that’s a guess on my part).  I love those pivotal stories that takes everything you know and tosses in a monkey wrench.  It truly makes everything that comes next sharper and more interesting as we learn what was hidden from view before.  I would definitely recommend this story, and if you’re following the series (which is a great idea) then get caught up because it’s about to get really interesting.

I read this title through My Kindle Unlimited subscription.