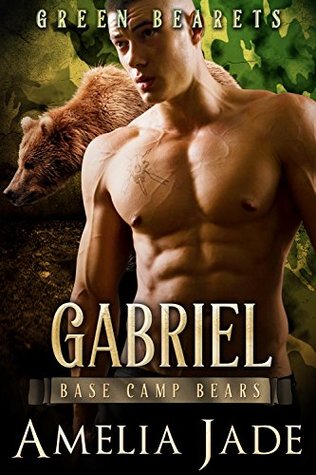 We’ve come to the final story in the Base Camp Bears series, and I have to admit to being sorry to see them go.  I don’t know if the next series will continue with Cadia and Fenris – there are certainly questions I still want answers for, and many Shifters within these connecting stories that I’d love to know more about.  But we’ll see sometime this month, if I remember correctly.  Definitely looking forward to what comes next.

Gabriel is the perfect bear to wrap up this particular series with.  He’s been here, on duty in Cloud Lake since the start of all of this craziness.  He’s devoted to his country and to those warriors under his command.  He’s not taken a day away from his duties from the first day and the toll on both him and his bear is beginning to show.  He is holding onto control of his bear by his fingertips, and that grasp is slipping away quickly.  When a patrol under his command is ambushed and returns to base bloodied, carrying their dead with one prisoner in hand, Gabriel’s thin thread of control snaps.  It’s indeed unfortunate that this is the first look at Gabriel or Shifters in general that reporter Stephanie Holmes got – a giant of a man with bulging muscles and blood on his uniform didn’t deter her for long from the questions she intended to get answers to… and if he was quite handsome as well, that was a professional observation.

I will confess it was quite difficult for me to have empathy or to really like Stephanie much in Green Bearets: Gabriel.  Yes, part of that is the role of reporter, but also the assumptions she made, and the actions she took would have far reaching consequences – and I’ve come to be quite protective of these characters over time.  Yet, she and Gabriel made up a perfect for them couple, a woman that this warrior clearly needed in his life now and going into the uncertain future.

I loved this ending story of the series.  As I mentioned, I feel there are still stories to be told about many of the secondary characters we’ve come to know on the surface – but if they will get their time in the sun, only patience will answer that question.  If this is the end, well, there’s enough closure for me to be satisfied… but it’s difficult to let this one go, so I am hoping for more.  I would recommend this story and all the connecting series to any reader who loves Paranormal Romance, Shifter Romance or simply one heck of a good story.  You’ll be hooked, in a very good way.